Christopher (Chris) Chu has amassed stellar credentials as a longtime technologist and business executive, recently adding a 2019 Global Corporate Venturing Rising Star Award to his accomplishments. Chris placed eighth out of the top 25 winners, in recognition of his outstanding efforts working with leading entrepreneurs and startups, and especially his contributions in digital health and automotives.

On the surface, Chris’ accomplishments seem similar to those of the many high achievers who populate Silicon Valley – a geographic area (and a mindset) that is sometimes criticized as a “bubble,” in which residents live their lives apart from the real world.

But Chris makes a point of leaving the confines of the Valley periodically to explore the world’s “remote corners” and to climb the mountains of Asia, Africa, and South America. Getting far away from Silicon Valley for adventure helps make him a better investor, he says. 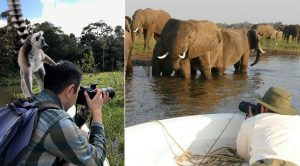 Traveling brings balance to his personal life, and fulfills childhood fantasies of being like Indiana Jones or becoming an explorer in outer space. It also reminds him that there are places well outside of the San Francisco Bay Area where creative and innovative entrepreneurs work on projects worthy of venture capital.

“Technology investment should be truly borderless,” Chris says. Yet among the biggest challenges he faces as Managing Director of the Samsung Catalyst Fund’s U.S. office have been those very borders.

“How do we cover all the innovations in the emerging technology hubs outside the Valley?” he says. “It takes a good team with the time and resources to proactively seek out the most creative ideas, innovations, and technologies that Samsung believes will have a huge impact in the lives of people all over the world.”

Chris says he believes that corporate venture capital (CVC) organizations like Samsung Catalyst Fund are in a better position to “change the world for the better” than are traditional venture firms, because CVCs are less concerned about short-term gains.

“This, I think, is the huge benefit of CVCs,” Chris says. “For example, my investment team is backed by a strong and stable corporate platform from which we can help nurture ideas and strategic growth – all the while having a longer-term view of the inevitable ups and downs of startups.”

Since he joined Samsung Catalyst Fund in 2013, Chris says he has come to believe that if the segment is to be even more influential in the future, then the virtual borders that divide one CVC from another must also be eliminated.

“CVCs can build stronger bonds amongst each other,” he says. “We all should be confident in pushing the boundaries of collaboration, partnership, and syndication, and looking for opportunities for more co-investment.”

Chris admits that some entrepreneurs are wary of CVCs, because they are afraid that the corporations behind the funds may not be as well-meaning as they claim to be. That’s a myth he wants to dispel, to push through the boundaries of misunderstanding.

“The Samsung Catalyst Fund team is here to foster win-win scenarios between startups and Samsung,” he tells the startups. “The team will help bring out and develop your uniqueness and germinate that core technology and business differentiation into an even greater partnership. We really look forward to teaming up and growing with you.”

This website uses cookies to improve your experience while you navigate through the website. Out of these, the cookies that are categorized as necessary are stored on your browser as they are essential for the working of basic functionalities of the website. We also use third-party cookies that help us analyze and understand how you use this website. These cookies will be stored in your browser only with your consent. You also have the option to opt-out of these cookies. But opting out of some of these cookies may affect your browsing experience.
Necessary Always Enabled
Necessary cookies are absolutely essential for the website to function properly. This category only includes cookies that ensures basic functionalities and security features of the website. These cookies do not store any personal information.
Non-necessary
Any cookies that may not be particularly necessary for the website to function and is used specifically to collect user personal data via analytics, ads, other embedded contents are termed as non-necessary cookies. It is mandatory to procure user consent prior to running these cookies on your website.
SAVE & ACCEPT